For the Special Edition CD, I designed an Origami Poster which folds into a geometric paper mountain – a 3D version of the album cover motif.

The best selling tracks across all digital services are: Someone Something Sunshine, Norway, the single You Are Electric and the title track Mountain King.

For this video, I wanted to create a Kraftwerk style performance and parody my gesticulations from the Space Cowboy clip. So I set the camera up on the tripod in front of a green screen and recorded five ad lib takes. From this, I cut together the performance and created the motion graphics in After Effects.

Okay, this is not exactly a review, but to receive a tweet like this from the godfather of electropop, made me feel kind of chuffed! As I infer in my tweet to Vince – I got the idea to create an electropop version of “In The Hall of the Mountain King” from listening to Erasure’s version (CD only bonus track on the 1987 album – Circus). The Erasure version is a faithful rendition of the classical work as an electropop track. But this got me thinking… I wonder if I could create a vocal line around this melody within the context of an original song (?) So this was the genesis of Mountain King – and now with an endorsement from Vince, the process is beautifully complete! 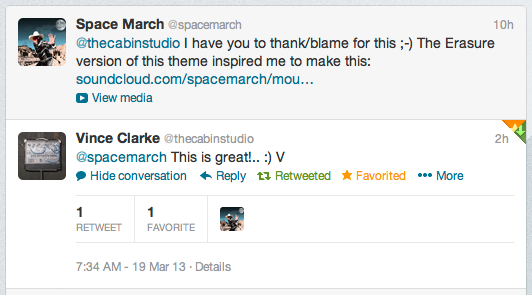 Swedish synth.nu reviewer, Martin Brandhill, ranks the Mountain King album at #6 for his best albums of 2013. The commentary below the chart is a Google translation from Swedish to English.

A year where actually several very good albums have been released that have not even got a place on my list. Australia and the Americas have really proven themselves in the electronic music world, which is very pleasing. This year’s surprises have Grafton Primary, Chvrches, Maps, Blutengel and especially Rainbow Arabia have been to me. The disappointments of the year 2013? Yes, it’s Little Boots, New Order, Visage and The Knife.

What is 2014 to serve when the crazy year 2013 has subsided? Yes, for example, The New Division, Heaven 17, Norwegian Margaret Berger from this year’s ESC, and preferably several unexpected surprises for me.

Here is a review of the Mountain King album on the Swedish synth.nu site. Following is a Google translation (with a few adjustments) from Swedish to English:

The Australian Craig Simmons – also known as Space March – has followed up with the album: Mountain King. Have you missed Space March before? His music can most easily be described as dreamy, bombastic synth pop influenced by indie pop, electronica, and a dose of eighties synth. Two groups frequently cited as influences are Air and Pet Shop Boys.

Craig’s lowest level is extremely high and all four albums are very worth listening, but differ somewhat. Personally, I think the last album Monumental, which is a bit more direct and more indie influenced, is his highlight so far. Mountain King is by no means bad, it’s just that Monumental set the bar for future albums extremely high.

Mountain King is a dreamy journey into synth pop music world. The album has been mastered by Robin Schmidt, who also worked with OMD. The music is more opulent and almost orchestral than its predecessor. It feels like Craig has listened in on some seventies pop regarding the orchestral arrangements. Add to that the warm sound that Air are usually good at communicating, together with a solid sense of pop melodies.

The album feels like a perfect soundtrack for hot summer days. The music is pleasant and easygoing and Craig Simmons has a very nice voice that caresses your ears. If I were to describe Mountain King with one word, it would be “beautiful”. A little fun Craig is having on the opening track, “Mountain King” – also the title track of the album, having used a melody in the song of the classical composer Edvard Grieg’s music for Peer Gynt.

Space March – Mountain King. While Parralox took a breather this year with a covers album, Australia’s other great synthpop band gave us a delightful “symphonic journey of retro-electro, classical and dream pop.” Mr. Vince Clarke gave this album a big thumbs up and I’m fully in agreement! “Someone Something Sunshine” is a highlight; bright but tinged with a little melancholy. “Mastermind of Crime” has some great lyrics, while “Too Much Time on my Hands” is a lovely bleepy bleep song.

Where Space March first grabbed me was with the track “Mountain King”, referencing Edvard Grieg’s “In The Hall of the Mountain King” from Peer Gynt.

It wasn’t the first track I listened to, and it certainly wasn’t the first time synthesizers gave pop life to a classical tune. The iconic notes grabbed my attention though, and combined with Craig Simmons’ voice to create something that felt seductive and perilous. As you listen more, the peril is not that there will be sudden violence, but an inexorable loop that you can’t escape. It feels unanswerable, and it works.

My other favorite track from the Mountain King album was “You Are Electric”, but the album is strong overall. I believe I liked it best of the other albums. There are not dramatic departures from the synthpop style of his earlier work, but I think he is on an upward trajectory.

Music can be purchased via the Space March web site and through Amazon. The web site also has three videos, which are also available on Youtube, but they are pretty perfunctory. “You Get What You Deserve” is the best of them, but really, the songs are way better than the videos.

The brilliant singer songwriter Craig Simmons aka Space March returns with his fourth offering. The music of Space March spins a gorgeous web of the best of 80s & 90s synth pop influences and yet in the process defines a signature sound all his own. Topping his previous effort “Monumental” is a monumental task indeed. To my ears, Space March sounds like the best moments of Duran Duran, ABC, Depeche Mode, OMD, Simple Minds, Sparks, Kraftwerk..etc, thrown together with the silky vocals of someone who sounds a lot like Stephen Duffy (Lilac Time/Kiss Me). Now, on the “Mountain King” he takes on the iconic “In the Hall of the Mountain King” by Norwegian composer Edvard Grieg. It is not a new idea, it has been explored by ELO, and others, but here Craig has added a great vocal track with his inspired original lyrics. It makes for a song that will play happily through your mind for days. The remainder of the CD is right there with the quality and originality that one has come to expect from this extremely talented multi-media artist. The songs “Someone Something Sunshine”, “Babylon” “Apple Of My Eye” & “You Are Electric” are particular stand outs for me. That said, there is simply not a weak track on the CD! The production is also something that needs to be mentioned, as it is just beautifully detailed in it’s sonic presence. As for the multi-media aspect, on “Monumental” Craig created a series of art prints for each song. Included in the Deluxe CD Edition of “Mountain King” is a package containing an origami folding mountain range! For my money there is no better synth rock/pop being produced and the “Mountain King” is definitely one of the top releases of the year! Do yourself a favor and get this immediately! While you are at it get “Monumental” as well! You will thank me in the morning!!

Note: Amazon and CD Baby sell the standard CD version – the CD wallet minus the Origami Pack. The Deluxe CD Edition of “Mountain King” mentioned in this review is available from spacemarch.com, Bandcamp, A Different Drum.

I’ve only recently became a fan of Space March after hearing ‘Space Cowboy’ and listening to his excellent free sampler. Since then I have been following this album’s progress through soundcloud.

Craig Simmons has been genuine and honest with his approach and very generous with his time and music.

But we don’t follow artists because they’re nice people do we? No, no. It’s still about the music and in this Space March have not failed us. Instead I believe he has given us his strongest album to date.

The album really sticks with you and has some addictive qualities. I’ve found myself craving a few the tracks on this album like ‘Someone Something Sunshine’, ‘Babylon’, ‘Apple of My Eye’ and ‘You Are Electric.

In short, if you like Release-era Pet Shop Boys, Notorious-era Duran Duran and a sprinkling of Erasure you should give this album a try. But don’t let those comparisons limit your expectations as this album is much more clever than that.

Open wide and let it go
Relax your mind and try to show
The things you hide, things the you know
Seeds of change are slow to grow
For every fruit is quintessential
All the trees stand monumental with
An open mind and an open heart
Like a ferris-wheel that’s reached the start

Norway
The sound of yesterday
Norway
My hope and shadow play

It’s no use pretending
You get older, everyday
You search the world for answers
More questions take their place
You feel there should be meaning
When looked at in reverse
The benefit of retrospect
Only makes it worse

All the way I couldn’t speak
I lost my voice and motivation
Eloquence, coherency
Evaded all my conversation

Sometimes
The world I find
Is chance and time
And out of control, again
I broke the glass
The empty half
I buried the past
Deep in my mind, again

Sometimes
The world you find
Is so alive
You want to believe, again
The beast you feed
Your wants and needs
This christmas greed
Is bringing you down, again

Regenerating new
Electricity
In everything you do
The power in your hands
Healing to begin
The energy, radiation
Pouring from your skin

You are electric
You electrify me…

11 Too Much Time On My Hands