A history of Duran Duran and Space March

A history of Duran Duran and Space March

This week I saw Duran Duran perform at Sydney Entertainment Centre, which is the fifth time I’ve seen them perform. It was a great gig, an interesting setlist and they were all very chatty recalling tales of Sydney from the early 80s. Of course, Duran Duran recorded their third album Seven and the Ragged Tiger at Studios 301 in Castlereagh St Sydney and also were the first band to play at the Sydney Entertainment Centre when it was opened in 1983. Apparently, the crowd of screaming young girls set a long held world record for the most noise from an audience. So they have fond memories of Sydney and their enthusiasm was well reflected in their performance this week. 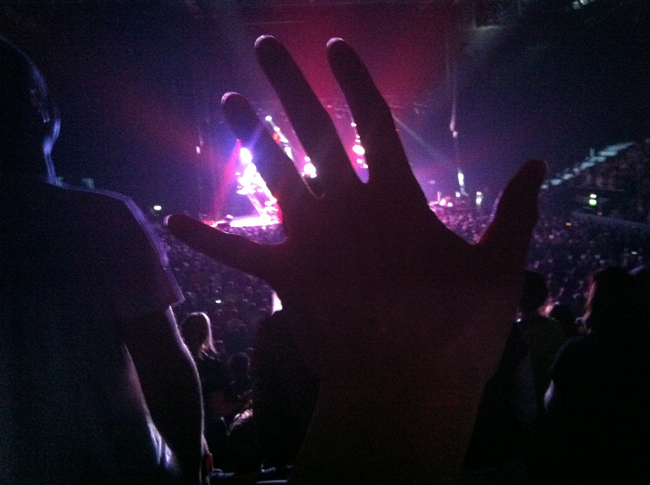 So it sounds like I might be a fan, and that is certainly true, but their influence on me and Space March has been far greater than that. Below is a recount of how Duran Duran shaped me growing-up.

As a child, I remember seeing the music video for their debut single, Planet Earth and was enthralled. The video was made specifically for Australia as the song went to #1 but the band were unable to tour due to commitments in the US. I’d never seen anything like this before – the band was performing on a futuristic wedge which looked so amazing to me and so different to the music videos of the time. The following year, watching Countdown (an Australian music television institution of the time) I saw the debut video airing of Hungry Like The Wolf which so affected me, I picked up my sketch pad and drew a picture of Simon Le Bon wading his way through the Sri Lankan waters. This was the first pop song to excite me and it still does all these years and listens later. Duran Duran’s trademark sound in the 80s was to key change for the chorus in an unexpected but exciting way and Hungry Like The Wolf does this perfectly.

Like most boys, my fascination with pop music coincided with puberty and discovering girls. In fact the Space March song – Do You Remember My Name? from my latest album Monumental – recalls this story in song and of course, Duran Duran gets a mention!

Duran Duran was undoubtedly my number 1 band as a teenager – their aesthetic really connected with me – I loved the energy, futurism, drama and romance in their music; the semi-abstraction of Simon’s lyrics; the mixing of fashion and art – basically the whole package. In the 80s, I was also obsessed with painting and modern art, and saw Duran Duran’s Nick Rhodes as a kind of mentor – here was an arty, stylish pop star making all these fantastic percolating noises with synthesisers. At this point, I gave-up trying to learn the electric guitar for which I was dreadfully untalented, and switched to synthesiser. I felt so inadequate at the time as all my friends in our high school band had all learnt piano (and I hadn’t), were much more musically advanced than me and all wanted to play synthesiser. At this point, I probably would have given-up making music but the passion and inspiration created by Duran Duran’s music encouraged me to persist. Overtime I realised I had a comparatively greater talent than my peers for being creative with synthesizers and production techniques; that not learning piano or graded music was an advantage; that the understanding for the craft of songwriting would come with experience.

Fast forward to Duran Duran’s Astronaut album in 2005. By this stage, I’d released a dance album in the mid 90s, two ElectroSquad albums at the turn of the century and the first Space March album in 2003, and importantly, Duran Duran had just signed to Sony Music where I was working as Online & Creative Director. I was very fortunate to meet the band when they came to Australia and managed to have a long chat with Nick about online technology and other geeky stuff (the photo for this blog post was taken then). This held me in good stead for a proper interview with Nick Rhodes and Roger Taylor when they returned to tour their next album – Red Carpet Massacre in 2008. After having a spate of breakfast television interviews asking them the usual banal stuff, they were really shocked (in a good way, I think) when I launched into some pretty hard hitting music related questions. But they answered the questions so intelligently and were so articulate, it made for a great interview. I have uploaded the interview (in two parts) to YouTube for your enjoyment.

I own all their albums and there have been times in their career when they haven’t got it perfectly right. But their latest album, All You Need Is Now – produced by Mark Ronson, has some good songs on it such as Girl Panic, The Man Who Stole A Leopard and Before The Rain which is pretty impressive for a band releasing albums for 30 years. To this day, Duran Duran are still so passionate about the music they make and importantly, always seem compelled to keep making new music. A cynic might see them as continuing to trade off ageing Gen-X women reliving their teenage fantasies, but I know from what I have observed and from speaking to them, that they are truly committed to the creative process and creating pop music as art in the spirit of David Bowie and Roxy Music from which they evolved themselves.

“We’re just one big Art School project, really – that’s how we look at ourselves now. When we do a new record, we don’t think wow, we’re going to go out and play stadiums with this, we think how can we make a really interesting record.” – Nick Rhodes

Favourite Duran Duran Singles:
Girls On Film, Planet Earth; Hungry Like The Wolf, My Own Way, Rio; Is There Something I Should Know?; The Reflex, Union Of The Snake; Election Day (Arcadia); A View To A Kill; Notorious, American Science; All She Wants, Do You Believe In Shame?; Violence Of Summer; Ordinary World; Someone Else Not Me; Girl Panic

Favourite Duran Duran Album Tracks:
I really love the whole B-side of the first album – Night Boat, Sound Of Thunder, Friends Of Mine, Tel Aviv; The Chauffeur, New Religion; Tiger Tiger; The Edge Of America; The Valley; The Man Who Stole A Leopard